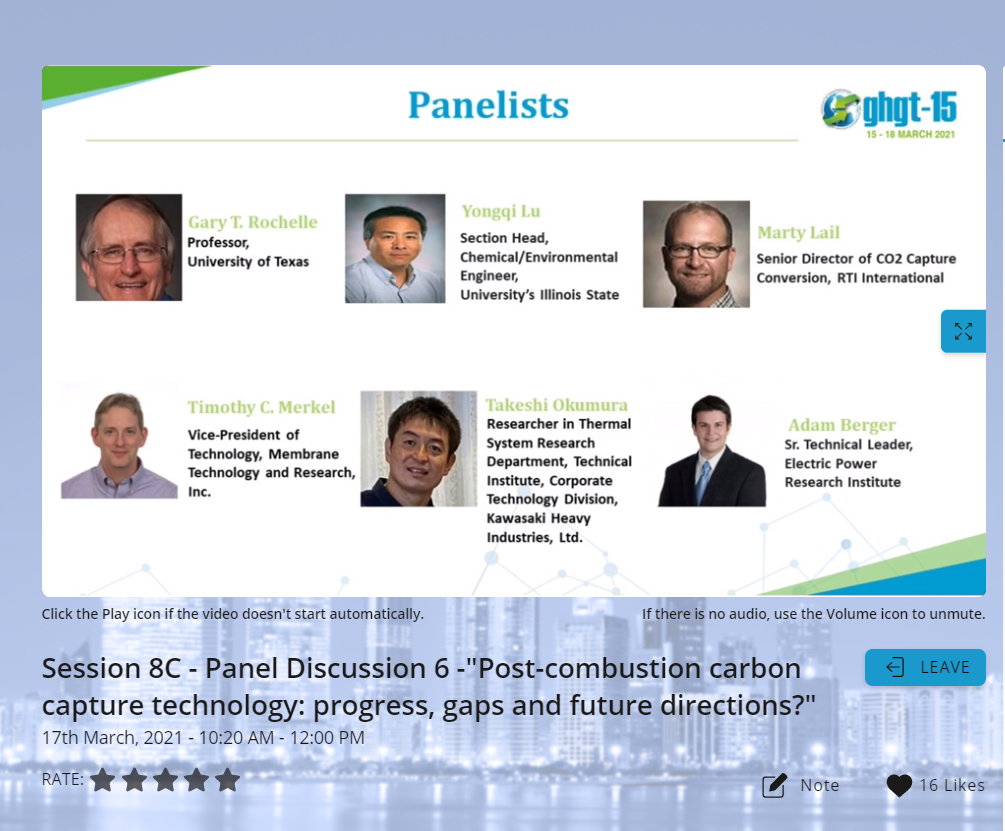 Panelists at the Session 8C Panel Discussion at GHGT-15

First up was Gary Rochelle, University of Texas, who described very succinctly the advanced status of amines for this particular task. Several 2nd generation amines were well established and had been demonstrated at scale, of which well-known examples include KS-1, DC-103, PZAS and Cesar-1. These solvents worked very well. Power requirements were low, approaching the theoretical minimum of 110 kWh/t – with the best now around 210 kWh/t. Amine emissions are no longer the problem they were, though some effort was still needed on amine oxidation. Challenges remaining included the capital cost, which needs to come down, and the realisation that 99+% efficiency was now the target. All in all, 2nd generation amines were presently hard to beat!

Yongqi Lu, Illinois State University addressed the status of biphasic solvents. He described the different types of, which were 'CO2 loading triggered' and 'thermomorphic', with current work at the university developing a new class of ionic strength switchable solvents. There were potentially a list of advantages of using biphasic solvents, the development status was still at the lower TRLs, with testing at small scale and a lot of development effort lying ahead.

Marti Lail, RTI International, presented the status of water-lean and non-aqueous solvents (NAS). With a focus on reducing CAPEX and limiting OPEX, he felt their developmental status lay somewhere between amines and biphasic solvents. Parametric and long-term testing had been undertaken at SINTEF on a 20 t/d rig, with testing presently ongoing at TCM, where the focus was on solvent performance, degradation, techno-economic and environmental assessments. Testing at TCM was planned for completion towards the end of 2022.

Tim Merkel, Membrane Technology and Research, discussed the status of membranes. Membranes had several inherent advantages, including the fact that, unlike amines, there was no chemical handling or disposal issues, and membranes required relatively little water usage. While today in the TRL6 to TRL7 range, effort was underway to move them towards TRL8. Membranes were well suited to capture rates of 50% to 70%, while costs rose quickly at higher rates – so, not really suitable for targeting 99%. MTR's Polaris membranes had been tested at NCCC or > 11000 hours. A 20 t/d test campaign at TCM was planned to begin shortly (Spring 2021) and a FEED study for 150 t/d at Wyoming's Dry Fork Station had recently been completed. In conclusion, Tim felt the performance and durability of membranes were promising, with the potential for cost and performance improvements as the technology was scaled up.

Takeshi Okumura, Kawasaki Heavy Industries, covered the status of solid sorbent technology. KHI was developing its own technology – named Kawasaki CO2 Capture (KCC) – an amine-impregnated porous material. The amine and degree of impregnation was customised to the particular application, depending predominantly on the concentration of CO2 in gas to be treated. The CO2 was recovered at ~60°C using waste heat, so low energy. Testing had been completed on a 10 t/d fixed bed, with further development using a 5 t/d moving bed design. Improvements had been made, e.g. virtually eliminating pulverisation of the sorbent during operation. With support from several other Japanese organisations, pilot scale testing was now planned at a coal-fired power station. Successful small-scale testing of the sorbent had also been undertaken at Wyoming's Integrated Test Centre (ITC) at Dry Fork Station.

Adam Berger, EPRI, described the merits and challenges associated with cryogenic CO2 capture. Separating as a solid on chilling the flue gas, dense phase CO2 is captured without the need for chemical separation. Potentially, a relatively low-cost process, it can achieve high capture rates, typically 95% to 99% though, to go higher than this becomes quite energy intensive. In addition, dense phase compression requires only a small fraction of the energy required for a gas, the energy penalty is purely electrical, and performance not limited by diffusion into a separation medium. A low-cost, low-energy process, the equipment required for cryogenic separation is generally well advanced. Challenges of capture using cryogenic separation include those associated with heat exchange and thermal management, the potential for plugging during recovery of the solid CO2, and ice formation due to moisture in the flue gas. Sustainable Energy Solution's Cryogenic Carbon Capture (CCC) process has been tested at the 1 t/d scale. There is also Carbon America's FrostCC process, which is presently undergoing testing at laboratory scale.

Many interesting points were raised in the subsequent discussion. The broad thrust seemed to be that amines were clearly the technology to beat! The current state of the climate required that capturing CO2 needed to be deployed at scale sooner rather than later, with a focus on the leading technology option, support for its deployment (in whatever form that takes – 45Q, California's LCFS, …), and R&D continuing on other technology options in parallel. Emphasising this approach, it was pointed out that, with the 'hub' approach to CCUS garnering significant attention, 'downsizing' of applications to address smaller-scale plants may, in future, bring some of the other technologies more into play.

There was also debate on the merits or otherwise of using low-grade or waste heat. On the one hand, the suggestion was that this 'free' heat could reduce significantly the LCA carbon footprint of the technology, while others pointed out that the poor thermodynamics would likely not merit the effort of utilising it.

There appeared to be general agreement that no particular technology would be more applicable to retrofit or to new build. Decisions would be based mainly on cost and also, for retrofit, on space constraints.