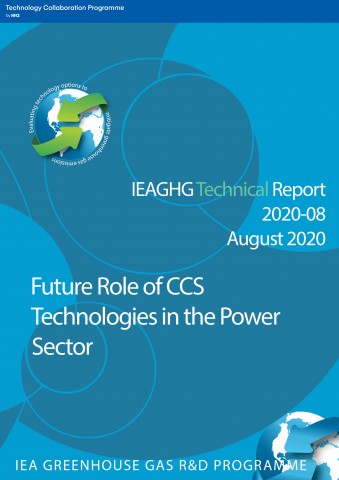 CCS technologies are essential for meeting global temperature targets. With power, as with the other sectors, the technologies have the ability to decarbonise but deployment rates are currently far 'off track'. To meet the targets required to mitigate temperature rises effectively, it is important to understand the specific role CCS technologies can play.

For this study, a techno-economic analysis was undertaken to establish the likely roles of CCS technologies in the power sectors of four regions; Australia, China, the UK and the United States. The viability of BECCS, gas CCS and hydrogen to cost-effectively decarbonise baseload, mid-merit and peaking generation, respectively, in distinct power markets was demonstrated. To decarbonise in coal-dependent regions, a progressive transition from coal power plants to BECCS was identified as a potentially attractive approach. The modelling also suggested that increasing CO2 capture rates markedly above 90%, making plants effectively carbon-neutral, could be cost-effective at high load factors.

Realising the potential of CCS technologies in practice, however, will require policy incentives and regulatory actions to be put in place urgently to overcome the two main barriers to deployment – high capital expenditure and lack of revenue generation. Economic constraints lie at the forefront of CCS-related risks and challenges. Projects usually involve high upfront capital investment (CAPEX) and, as captured CO2 is not highly valued, they also lack mechanisms to recover operational expenditure (OPEX). Some of the major emerging support mechanisms or actions to address the market failure that stems from high CAPEX and OPEX, to create more investable business models for CCS, are spelled out in the report.

Incentives were also considered for CO2 transportation and storage (T&S) business models. In the future, most CCS projects are likely to use shared T&S infrastructure, probably managed by dedicated companies. Clustering capture facilities, oversizing initial assets and utilising existing assets that would otherwise be decommissioned would significantly reduce the cost of T&S deployment. Furthermore, countries could accelerate T&S infrastructure roll-out via public ownership or regulated models which are currently applied to monopoly utilities in some regions.

This study shows that CCS technologies have different roles, from baseload to peaking operation, in diverse power markets. To determine what actions best suit its power market and unique circumstances, each country may want to expand on existing policy mechanisms that are proven to work well or to improve upon the existing frameworks. In addition to country-specific messages, mechanisms applicable across the regions are also addressed.

To request a copy of the report, please email This email address is being protected from spambots. You need JavaScript enabled to view it. referencing report number 2020-08.